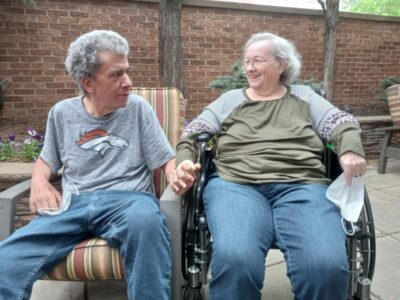 In early March, while the Biden administration was announcing that they were tightening their reins on America’s nursing homes for poor care, two Colorado senior living care communities were working hand in hand to reunite a couple who had been separated for months due to a healthcare crisis.

In 1987, Bonnie Smith and Dexter Lewis met unexpectedly at Boardwalk Mental Health Center in Denver. Striking up a friendly conversation as they patiently awaited their appointments, they soon realized they shared a mutual interest in Hollywood movies and a love of TV sports. Bonnie and Dexter’s chatting continued over the phone for several months. Eventually, Dexter gathered his courage and suggested that he and Bonnie go together to see the newly released movie – Cocktail. Bonnie accepted the invitation, and the rest is history. The couple describes their chemistry as “just as strong as Tom Cruise and Elizabeth Shue’s at that bar in Jamaica!”

In June of 1992, the couple moved in together. Bonnie’s 19-year-old son Kenneth readily welcomed Dexter to their family. Unfortunately, Bonnie and Dexter lost Kenneth to cancer in 2019.

After 29 years of living inseparable lives, Dexter began experiencing health issues. In August of 2021, after a brief stay in the hospital, Dexter was moved from the acute care setting to The Solange at Appletree Assisted Living in Colorado Springs. This allowed Dexter access to the treatment he needed to maintain his health. During this time, Bonnie began to experience her own health concerns where she too was transported to an area hospital.  Because Bonnie needed more care than she could receive at home, or at the community Dexter was living, she chose to live at Saint Paul Health Center in Denver.

Although Bonnie and Dexter were both receiving good care in their respected communities, they missed each other terribly. They spoke on the phone daily, but it wasn’t the same. Bonnie frequently told her caregivers how much she missed Dexter and wished they could live together again. This gave Steve Koehler, the concierge at Saint Paul an idea. “Let’s get Bonnie and Dexter back together again, if not under the same roof, at least for a visit?”

After sharing this idea with other staff members, Sandra Baca, Saint Paul Admission Director, took the next step and began looking for Dexter. Once she determined where he was living, Sandra contacted the administrator of Solange at Appletree who shared that she too was aware of Dexter and Bonnies’ relationship. Soon, both communities were working a plan in getting the couple back together.

A few weeks later, everything was in place to move Dexter to Saint Paul where he could be close to his companion. Although Bonnie knew that there were efforts being made to move Dexter closer, she had no idea when or if this might occur.

On March 2, as Bonnie sat contently at her table waiting for her breakfast to arrive, the elevator doors opened and there was Dexter wearing the same smile that had lit her up 30 years earlier. The couple was elated to be together again.

Since their reunion, Bonnie and Dexter have spent every moment possible laughing, holding hands, and telling everyone who will listen, their love story. Their love and friendship have been a light to everyone at Saint Paul.

Both Bonnie and Dexter agree that the Biden administration would be pleased to know that there are senior living communities who go above and beyond for their residents. Because of Saint Paul Health Center and Solange at Appletree, Bonnie and Dexter are now writing the next chapter of their love affair – in the same location!

We are passionate about serving our residents and their families in a unique intersection of hospitality, wellness and healthcare.  Imagine the positive difference you can make each day on a senior’s life.